I am here to discuss two movies in this blog post of movie reviews! This couple of reviews includes a film that I have seen before and loved, Leap Year, and a film that I just watched for the first time and found to be quite awkward for a romantic comedy, All Relative.

I saw this movie in theatres when it was first released and there are three main points about the film that made me love it. 1) Amy Adams is amazing at romantic comedies and it definitely shows throughout this entire movie. She should really do them more often. 2) Matthew Goode is gooooooood looking. That accent though, that accent though. *deep sigh* Okay, I’m okay. He makes that Irish accent sound amazing and I didn’t want it to end. 3) Wanderlust like no other. To explore Ireland and eventually Dublin would be pretty amazing. The scenery throughout this film is fantastic and would be amazing to see with my own two eyes. Maybe one day. Until then I can watch this movie again and again and adore the characters and the locations and just the entirety of this movie in general. I would definitely recommend this to anyone that likes to listen to a great accent, loves beautiful scenery, and loves watching two people playfully fight as much as Amy Adams and Matthew Goode do in this movie. Bonus points for putting in supporting role for Adam Scott.

Three stars was really pushing it on this film for me, but I thought I would allow it to get the third star for some magical reason, not that any magic is in this movie. The new-to-Netflix romantic comedy All Relative is about a man, Harry, who gets himself into a bit of a family matter when he meets his girlfriend’s parents for the first time only to realize that he slept with her mother right before dating the daughter. Talk about awkward! There are so many ways in which I could have seen the movie going, and it happened to take the most awkward route possibly and it almost made me uncomfortable to watch it just because something seemed off throughout the entire movie. The trailer definitely makes it seem more like a light-hearted rom-com that you would watch these days, but this one just did not follow the same formula that could have made this one great. The music did not fit well with the film either. I know it was not some high budget production, but music could have helped this one be a bit better. It gets the third start because Sara Paxton’s hair and skin and makeup and well, just about everything was perfect. That third star is just for her. I was eager to watch this one and am glad I finally did, but I don’t think I would watch it again.

Have you seen either of these films? Let me know what you thought about them in the comments below! 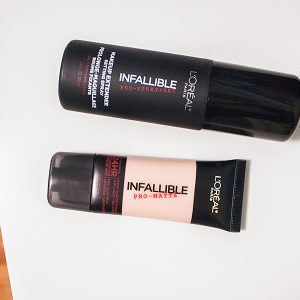 The Infallible Pros from L’Oreal Paris