It appears I have hit another little movie watching time, which has not happened much lately. Browsing through my options I decided to make the next two movies I watched have at least one really awesome thing in common: they both star Zoe Kazan. With no further ado, here are my reviews for The Pretty One and In Your Eyes.

First up, we have a movie about a pair of twin sisters that are complete opposites, but after a horrible car accident, one of them gets the chance to start over in her sister’s place. This can all be seen in the trailer, with even more detail, so I am not really giving away any spoilers here. I would like to commend Zoe Kazan on her ability to give each of the twins their own personalities that is completely different from the other. One thing I was reminded up while watching this movie is that her hair is extremely awesome when cut into the long bob with full bangs. I wanted to cut my hair like that after seeing her in The F Word with a similar hair style, but I cannot be bothered with the bang maintenance to actually go through with it. Enough about her hair. Her acting is amazing as per usual, playing all sorts of emotions throughout this film. My favourite part of this movie is any time she has scenes with Jake Johnson of New Girl fame because they were equally as realistic as they were funny.

I don’t even know where to begin with this movie. It had been on my Netflix “my list” for a while to hopefully watch one day, mostly just because I am a fan of Zoe Kazan. After watching the previous movie, I knew I wanted a double movie feature and made sure that this was the next movie I watched. This Joss Whedon written movie stars Zoe Kazan and Michael Stahl-David, two strangers of different lifestyles that have this strange connection where they can hear each other’s voices and see through each others eyes. The premise of the film is extremely bizarre, which is maybe why I put off watching it for as long as I did. Now that I have seen the movie through and even gave myself almost a full day to digest what I watched, I can without a doubt say that I highly recommend this film! It is not some strange scientific exploration of the mind as one might think, but the emotional story between these two strangers and their bond that is created through their minds is one of the greatest things that I have watched in a while! I do not want to give away any spoilers, so I just urger you to give this movie a chance and I hope you enjoy it as much as I did. Also, the few sons that were used throughout the movie included a few songs that I already really liked, so that was a total bonus! 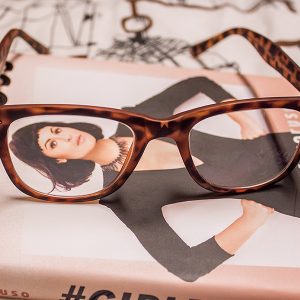 My New Specs from SelectSpecs