Two movies that were on my “to watch” list were watched recently, which means two more movie reviews for the blog!

The main appeal of this film was witnessing Anna Kendrick in a new role. I am not someone that has to watch all the musical-styled films or films based off of Broadway musicals, but this one looked like it was have a great storyline to follow and a love story to take you on a rollercoaster of emotions through song and lyrics. I was a big fan of the Hairspray when it came out as a movie, and although this did not come as well liked in my mind, it was still a decent movie. The main great thing about it was the fact that Anna Kendrick can sing! I have seen other clips online of her singing, as well as the Pitch Perfect movie and sequel, but this type of vocal talent reaches a whole new level. The movie itself was not in order from the female and male meeting to what ended up being the end of their love story (that was not really a spoiler as it is the first thing you learn in the trailer), as it decided to scramble up the events and which order they took place as a lot of movies are doing these days. Due to the beginning of the movie being told through a heartbreaking song from Anna Kendrick, I just never liked the male character played by Jeremy Jordan throughout the entire film knowing that is how it ends. He can sing though, I will give him that. If you have an hour and a half to watch a musical film that basically proves that Anna Kendrick is amazing and talented, then this film is for you.

I really had no interest in watching this Marvel movie when it first came out because the whole space and fighting adventure type of movie never really appeals to me. I eventually learned that this movie had two things I would be interested in: humour and a kick-ass soundtrack! I was pleasantly delighted throughout watching the movie and thought it was made extremely well to appeal to a much wider audience with aforementioned elements. The soundtrack full of great classics, and a reference to Kevin Bacon were among the reasons why I really liked this movie. Chris Pratt did an impeccable job at playing Peter Quill (Star-Lord), but my favourite character was definitely Rocket, voiced by Bradley Cooper, even if I couldn’t hear the resemblance to his voice for the majority of the time. The film had a perfect ending scene and credit scene, but I won’t be spoiling anything for anyone that still has not seen it. I was definitely singing along to the scene while it played “Ain’t No Mountain High Enough” over the scene. Also, “I am Groot”. 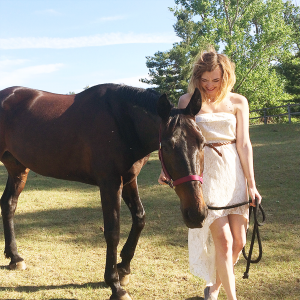 Behind The Scenes: Photo Shoot with a Horse