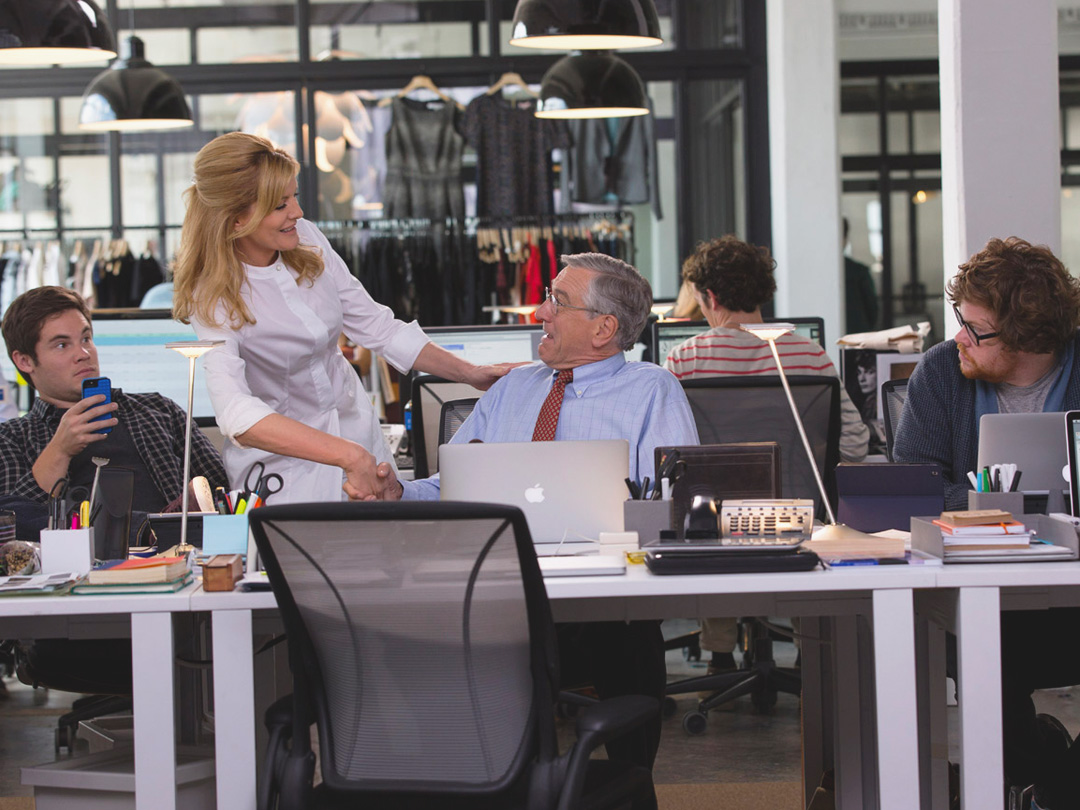 I know, I know. I’m on a bit of a movie review role lately. It doesn’t happen very often that I watch a string of movies and especially not all in a week or so. Trust me when I say there are still a few movies I have seen lately that I have not written reviews for, just to make sure that I did not give an overload of movie heavy posts all at once. I will try to space them out a bit more after this one. It was very important that I got this one up as soon as possible though because The Intern is a movie that you actually really need to see.

I remembered the trailer first coming out for this film and how I wanted to see it so badly, and knew waiting many months for its release would seem like forever. The movie did come out in September, but on the day I left for Mexico on vacation and did not catch the movie right away. I kept remembering the movie was out while on vacation, but once I got back home I forgot all about the movie for a while. Here we are almost halfway through November and I was lucky enough to catch possibly one of the last screenings of this movie before it gets taken out of theaters. Needless to say, I will admit it was definitely worth that wait.

This film is not your typical romantic-comedy type of film because the main two characters Ben, played by Robert De Niro, and Jules, played by Anne Hathaway, are not meant to have a romantic relationship at all throughout this movie. Ben gets hired as part of a senior intern program at an online clothing retail company run by Jules to be her personal intern. The concept around a senior citizen being an intern is hard for most people to wrap their heads around, but this made for a very great storyline in every single way possible. Very reluctant at first, Jules is not a fan of this idea and gives him no tasks to carry out, but soon realizes how much she needs an intern, and more specifically Ben.

This movie is definitely under the comedy genre as it proves to provide lots of laughter from beginning to end. With supporting roles from Adam DeVine, Zack Pearlman, and Jason Orley, this movie is destined to make you laugh in one way or another. Jules’ husband Matt is played by Anders Holm (yes, two Workaholic actors in this movie now) and although he may not provide much comedy, he still adds something extra with his role. Every single character was important to this movie as a whole. There was even an extremely short cameo by Nat Wolff as well.

The true message that comes across in this film revolves around the idea of companionship. This is shown through Ben’s friendship that develops with Jules and how he can make new friends in his later years of life. When a movie like this ends, you are just meant to feel really happy. If I would compare it to any other film I would actually put it pretty close to The Holiday but that may be mostly because Nancy Meyers both wrote and directed both of these movies. She has a way of making movie magic that makes you feel genuinely happy. She hits the emotional buttons when needed, and can make you laugh at the same time. Two big thumbs up for Nancy Meyers, all the actors in The Intern, and the movie for existing.