Exploring The World Of Pastel Hair

If you have been following my social media lately, you will already know that I was dabbling and experimenting with variations of pastel hair colours over the past several weeks. I have been a fan of my lighter blonder hair for over a year now and since I first dyed the ends of my hair light pink back in the summer time, I was itching to do it again. My initial goal was my blonde hair with the bottom being a light purple, lavender-like shade, but the journey to get there was a challenging one.

I started off with realizing I had to bleach the ends of my hair and attempt to ombre out my hair with a bleaching product, frightening. I have been doing all my own hair cuts and dyes for countless years now, so I didn’t think this task would be too tricky since I have done similar things before when I did at-home ombre attempts that were fairly successful in the past. My bleaching attempt did not end up as much of an ombre as planned, and I was a bit unhappy with he results, but thought the pastel colour would be able to hide most of that up for a period of time. Next came time for the colour! I bought a lavender shade hair dye and ended up with a pretty light lavender result. With my hair being naturally straight, I did not like how it looked as much as I knew I would curled, so I curled it up quickly and and called in a night.

The following morning I decided to attempt to fix the problem and make it look a bit better and bought some more supplies: more bleach to try to fix the ombre effect up a bit more, and new purple dye from Manic Panic and a pastel-izer to make it a pastel colour instead of a vibrant dark purple. I continued the procedures throughout the early evening and ended up with a more likeable result! I was not expecting the bleach to actually turn my hair shades of blue, so that was something that was at least helping the purple stick out a bit more. I curled up my hair again and was quite happy with how it looked for a night out on the town.

After dealing with the purple for another day or so, and even making the purple more vibrant, I realized that I was much more a fan of the pink that I originally had in my hair and wanted to slowly transform my purple hair to pink hair and that was my goal for the next week. I took  my old temporary pink hair dye and slowly added it into my hair during showers and washed it out rather quickly. I eventually ended up with a really nice light pink ombre effect in my hair (see the first image in the set) and absolutely loved the pink.

Now that the coloured hair dye has all washed out after those few weeks, I am left with extremely white blonde tips in my hair and I think it calls for tiny bits of pink hair dye again to bring a little life back into the hair. I had a lot of encouragement to dye my whole head the lavender shade, but I am glad I didn’t go through with it this time around, but it is still something that sits in the back of my mind when I think about what to do with my hair next. I am no professional when it comes to hair, but each time I do something new I learn something from it, and for now, I will stick with knowing that pastel pink tips works best for me and my hair. 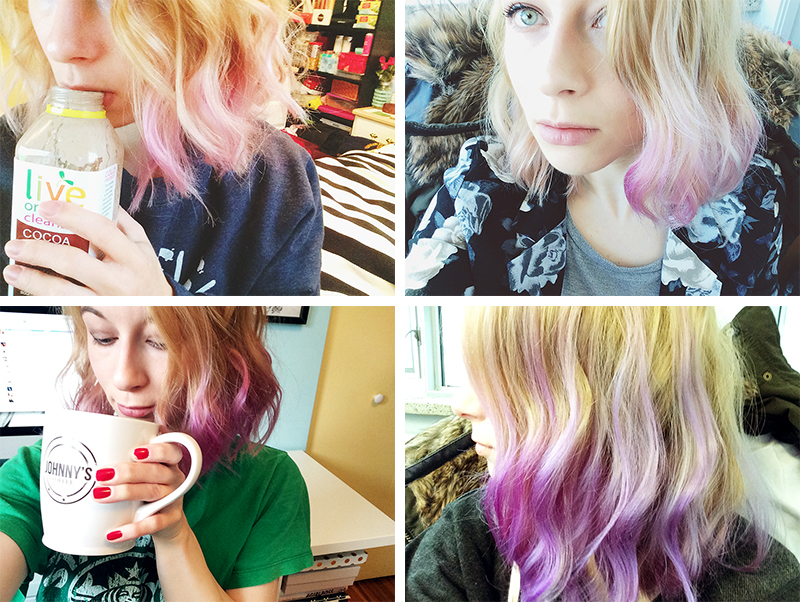